Context: One widely-accepted belief in the effects of climate change is that storminess will increase commensurate with CO2 and temperature. Storminess is often measured in terms of hurricanes and tornadoes, since they have qualities that are able to be measured in terms of numbers and strength. Here we present tornado statistics as compliled by the NOAA Storm Prediction Center. There is a basic problem quickly identified - CO2 is rising quite steadily and tornado frequency is not. In fact, 2016 has had the lowest number of tornadoes since modern record-keeping began. In August 2022, the frequency was below the 25th percentile in the data base. The NOAA Storm Prediction Center shows no increase in tornado frequency in the USA, where there are better statistics than in other regions. Similarly, a detailed analysis of global Hurricanes/Cyclones shows no significanct increase in major storms.over the measurement period after removing the effects of population increase and improved reporting methods. 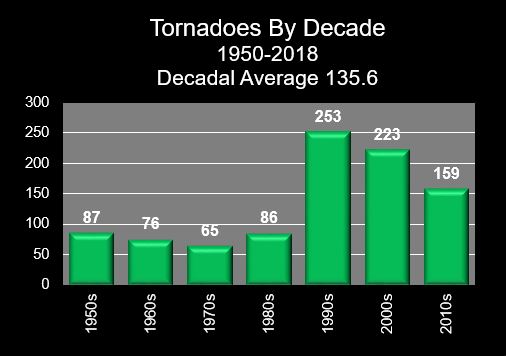 There appears no consensus whether El Niño oscillations are related to any aspect of climate warming. There is a weak correlation between La Niña and tornado intensity. The latest NOAA prediction is available here.

The trend in numbers of major F5 and EF5 Tornadoes of the United States shows no trends. These data are as of August 2022 and do not take into account improved observation and analysis techniquest since 1950. F5 and EF5 Tornadoes of the United States 1950-present

Analysis: Conventional wisdom states that storminess will increase with CO2 and warming. Clearly there is no change in the frequency of tornadoes in the USA nor of global hurricanes/cyclones. Per the World Meteorological Organization, "The fact that most models now predict an intensification of tropical cyclones in a warmer climate is presumably what may be expected, as the increase in latent heat will provide more energy for the storms" and "The reduction in the number of storms in a warmer climate, which a majority of models now predict, is less obvious" but can be attributed to less favorable conditions for the initiation of storms. There is no evident relationship from observational data between the increasing amount of CO2 in the atmosphere and major storminess and even modeling has not been able to substantiate a relationship when confronted with observational data.

With 2016 becoming the year with fewest USA tornadoes since 1953, when data compilation began, it is pretty clear that CO2 with its steady increase is not driving the occurrence of such storms in the USA. Since temperature differences between areas are drivers of storms and since the poles are warming faster than the globe as a whole, This editor believes there is increasingly less of a temperature differential to drive storm formation and intensity.

This page updated or reviewed in August 2022